Shepard Fairey and the Current World 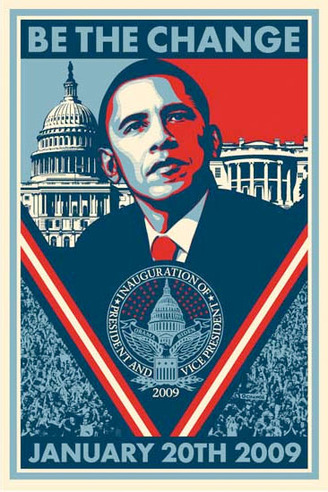 Fairey’s view of government should be important to every inhabitant of the earth, and especially the citizens of America. If Fairey were successful in lessening America’s war dues, the entire country would benefit because this would mean more funds for government use such as conservation of resources, education, agriculture, poverty and more. The idea of government views and expressing it through artwork is also very important for K-12 students because they are the future adults and leaders of this country. It is very important to get students, especially ones in the older grades, to start thinking about the country they live in and the way it is run. It is also important to begin to get younger students thinking constructively towards observing situations, forming opinions, and then acting accordingly.

Students would benefit from bringing this big idea into the classroom because they would be learning about the government through art, as well as self-expression. Mainly older students would benefit from thinking of a pressing issue related to the country, be able to form their own opinion, and then creatively express their opinion. Shepard’s big idea would also be able to cooperate with other subject areas, such as music and language arts in a similar way as the big idea cooperates with visual art. Music artists and writers can be similarly self expressive in order to get an idea out into the public. As for math, the government is wrapped around statistics and numbers based on what the government in using funding for; math is needed to track the country’s government funding over time and observe change. Philosophy and social studies have everything to do with government views because they are both about our society, human interaction, human reaction, and personal opinions.