In 2008 Fairey took his design skills to supporting the Obama campaign. He created the famous “Hope” poster. The poster was not originally endorsed officially by the Obama campaign, but timage quickly became the face of the campaign. Fairey is a great example of a street artist who has had his fair share of trouble with the law but is able to use his art to reach millions, while making a living for himself.

The New Face of the Campaign 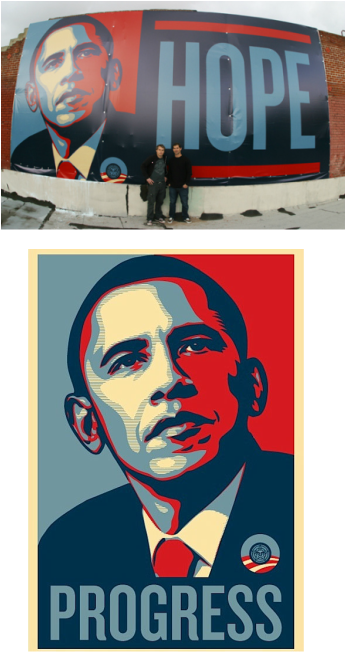 BEFORE HIS FIRST ART MUSEUM EXHIBITION, SHEPARD FAIREY REALLY GAINED HIS FAME WHEN HE CREATED HIS OBAMA “HOPE” POSTER FOR THE PRESIDENT’S 2008 CANDIDACY. THE POSTER BECAME WILDLY POPULAR VERY QUICKLY, BUT THERE WERE COMPLICATIONS THAT FOLLOWED. THE HOPE POSTER WAS BASED OFF THE PHOTO OF OBAMA THAT WAS TAKEN BY MANNIE GARCIA FOR THE ASSOCIATED PRESS THAT SAME YEAR. THE PHOTOGRAPHER WAS FINE WITH FAIREY USING HIS PHOTOGRAPH, BUT THE ASSOCIATED PRESS WANTED CREDIT AS WELL AS COMPENSATION FOR THE WORK OF ART.

Shepard Fairey literally created the new face of the Obama campaign. He explains that he is usually into creating art that expresses what he feels is wrong with the government, but this time he can show what he likes about the government. Fairey decribes that the Obama campaign is unique based on the fact that he can make supportive art about him.