Shepard Fairey is extremely passionate about expressing his attitudes of the government in a public setting, whether it be on buildings or in his art shows. Fairey uses a lot of postmodern techniques in his work. Most of his prints and fine art pieces are easily relatable to 1940’s art deco posters and wartime posters promoting the purchase of war bonds.
Fairey’s view of government should be important to every inhabitant of the earth, and especially the citizens of America. If Fairey were successful in lessening America’s war dues, the entire country would benefit because this would mean more funds for government use such as conservation of resources, education, agriculture, poverty and more. The idea of government views and expressing it through artwork is also very important for K-12 students because they are the future adults and leaders of this country. It is very important to get students, especially ones in the older grades, to start thinking about the country they live in and the way it is run. It is also important to begin to get younger students thinking constructively towards observing situations, forming opinions, and then acting accordingly. 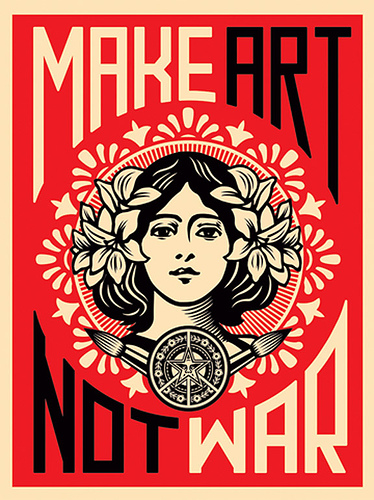 Shepard Fairey, now 42 years old, was born in Charleston, South Carolina in 1970. His father was a doctor and his mother was a relator. Fairey’s life as a Caucasian male living in America was able to give him a good perspective on peace, war and government, which are prominent themes in his artwork. Most of Fairey’s art consists of printmaking and the others consist of paintings and mixed media. Shepard Fairey started his street art campaign at the Rhode Island School of Design where he used materials for printmaking. Shepard Fairey did not have a goal to make money or be famous, but to make art that people would have a response to, whether it be positive or negative.   He is in good understanding of how our government is working and the negative things that it is inflicting on the lives of Americans. For example, Fairey is furious on how money is being taken away from colleges and schools so people have to pay more for an education. In result, most people today that cannot afford such education stick themselves in the military so the government can pay for their college. Fairey hates kids who want to pursue the college degree of their choice have to go to the military because of poor funding on the government’s part. When President Barack Obama came along, that is when Shepard Fairey had hope in our government and was able to express positive government feelings in his artwork, when normally his work expresses mostly the negative view of the government and world around us.
Powered by